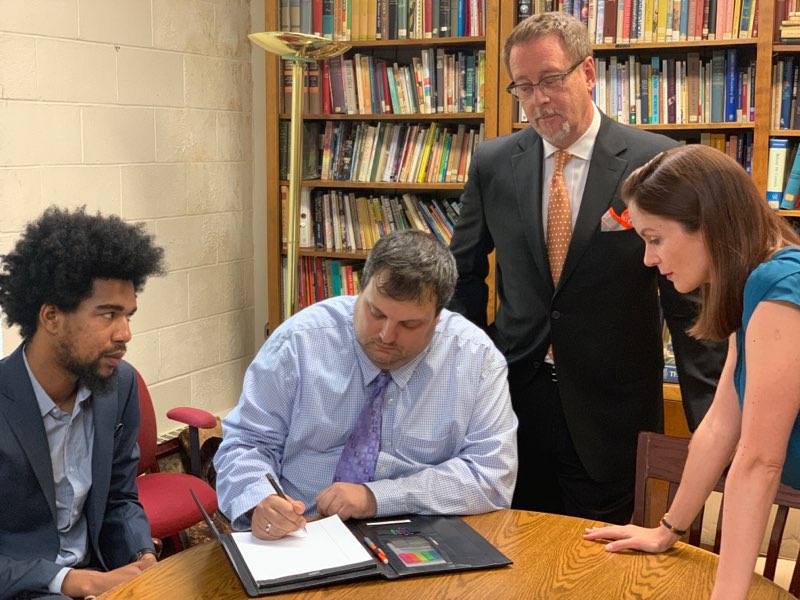 Corporate greed. Out-sourcing. Layoffs. Have you ever wanted to look inside the business world and see how decisions are really made? Assembly Line Theatre Company is giving their audiences an opportunity to do just that, with the staging of the play Dry Powder by Sarah Burgess. Performances will be at the historic Hunt Street Station, an 1897 architectural gem and former Detroit police station which has been converted to modern co-working space, and is located just outside Eastern Market.

“We are excited to push the boundaries of theatre with this production,” says director Cassandra Svacha. “The audience will be able to surround themselves in this beautifully restored space and get a voyeuristic view on how deals are really done, and how decisions are made, in Detroit and beyond.”

In Dry Powder, the same week Rick’s private equity firm forces massive layoffs at a national grocery chain, he throws himself an extravagant engagement party, setting off a publicity nightmare. Fortunately, Seth, one of Rick’s partners, has a win-win idea: invest in an American-made luggage company for a song and rescue his boss from a PR disaster. But Jenny, Seth’s counterpart, has an entirely different plan: to squeeze every last penny out of the luggage company, no matter the consequences.
Dry Powder stars Ken Alter, Anne Damman, Jon Kent, and Jacob Plante. It is directed by Cassandra Svacha and stage managed by Sarah Drum.

Assembly Line Theatre Company was founded in the spring of 2017 in Detroit, Michigan. Yes, we are a working class theatre for a working class town. Our mission is to produce original and established works that entertain and are relevant in today’s world. As a Detroit  theatre we want to reflect the diversity of the population of the city and surrounding areas in our work on stage, our audience, and our workforce. We strive to build bridges and we aim for inclusion. We want to produce theatre that appeals to a wide variety of people: sometimes edgy, sometimes goofy, sometimes serious, but always entertaining.  Our intent is to spark discussions rather than answer questions. Theatre is a team effort, done one step at a time. We are building something from the ground up and it takes many different moving parts – including our audience – to make that ha